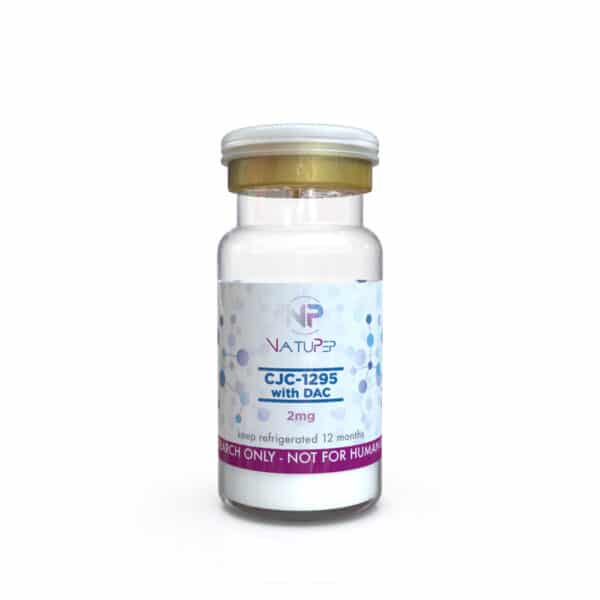 CJC-1295 peptide with DAC, also known as DAC:GRF, is a synthetic mimic of a portion of naturally produced growth hormone releasing hormone (GHRH). The CJC-1295 with DAC peptide chemistry is based around the first 29 building blocks of endogenously produced GHRH, as these first 29 amino acids provide full biological activity [1]. However, this peptide has been modified further by substituting four amino acids to increase its stability and potency compared to previous CJC-1295 without DAC. These four amino acids allow the peptide to bind permanently to the protein albumin inside the body, which reduces degradation and oxidation of the peptide to increase its stability [2]. Furthermore, these additional amino acids increase the binding affinity to the GHRH receptor to increase potency. GHRH is necessary for natural growth hormone secretion and is also needed to achieve optimal natural growth during development [3]. CJC-1295 works by stimulating growth hormone secretion by binding to GHRH receptors and should stimulate the secretion of the whole family of growth hormone peptides normally secreted by the pituitary gland [3]. These hormones will stimulate increases in bone density and collagen production, as well as boosting the immune system. They will also stimulate the production of lean muscle mass. CJC-1295 with DAC can be combined with growth hormone releasing peptides for enhanced peptide cycling results. CJC-1295 DAC is commonly paired with growth hormone replacement peptide (GHRP) 6 or GHRP-2. Combined use of CJC-1295 DAC with GHRP’s will accelerate fat loss and weight loss and stimulate anabolic effects via growth hormone induced fat breakdown [4]. Overall, CJC-1295 with DAC will stimulate protein synthesis and fuel the growth of lean muscle tissue. The peptide also promotes faster injury recovery, a reduction in body fat and increased muscle mass. The growth stimulatory properties of CJC-1295 DAC will also stimulate cell growth and division to improve skin health, healing and immune system function [5, 6].

This peptide should not be confused with CJC-1295 without DAC as the chemical properties are very different and will affect dosing. CJC-1295 DAC has a half-life of around 8 days following injection [2]. CJC-1295 with DAC injections should be subcutaneous and the peptide can be injected once per week at doses of 100 mcg or 200 mcg due to its extended half-life. This CJC-1295 DAC peptide cycling strategy will provide a prolonged overall increase in growth hormone. A weekly injection of CJC-1295 with DAC can be coupled (stacked) with other GHRPs, such as GHRP-6 or GHRP-2.

Many researchers have documented the growth-promoting effects and safety of GHRH administered to children with growth hormone deficiency [7, 8]. Multiple treatment regimes, including intravenous pulses, intranasal delivery, subcutaneous injections, and continuous infusion have been tested to show that the growth-promoting effect of GHRH is connected with the dose amount and frequency. No unexpected adverse reactions have been seen after prolonged treatment, regardless of the mode of administration [9, 10]. However, some minor side effects may occur, including tiredness, euphoria (head rush), water retention, tingling and numbness. Following the recommended dosage will minimise the risk of side effects.