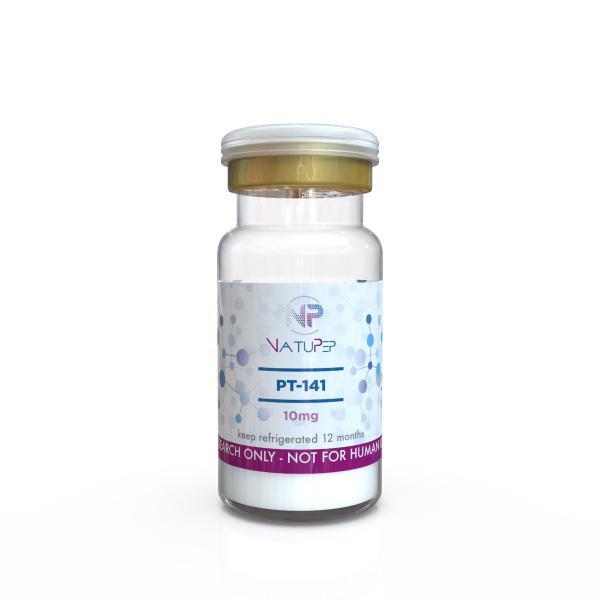 PT-141 is also known as bremelanotide and is a peptide made up of seven amino acids formed into a ring-like structure. The peptide is developed from previous generation alpha-melanocyte stimulating hormones, such as melanotan II, and binds to multiple melanocortin receptors [1]. However, unlike previous generation melanotans, it does not have a high affinity for melanocortin receptor 1, which is the receptor that stimulates sunless tanning. Instead, bremelanotide binds melanocortin receptors 3 and 4 in the brain, which are the most important receptors involved in sexual arousal, desire and increasing libido. Studies in rats and humans have shown that stimulating these receptors leads to an increase in sexual desire and arousal [2, 3]. Direct infusion of agents that bind to melanocortin receptors in the brain also increased the sexual interest and levels of the ‘happy hormone’ dopamine in female rats [4]. Clinical studies have shown that the drug is able to stimulate an erection in both healthy men and in men with erectile dysfunction, even where Viagra has failed [2, 5]. In studies investigating female erectile dysfunction, a significant number of premenopausal women with female sexual arousal disorder reported increases in sexual desire after intranasal dosing PT-141 [6]. These same women also reported greater feelings of genital arousal following treatment with PT-141. Another phase II trial lasting two months also showed that the peptide increased the number of satisfying sexual events, sexual desire and arousal [7]. Promising data from two additional phase 3 studies also showed that PT-141 was able to increase sexual desire and decrease distress associated with low sexual desire. These studies finally led to the peptide being legally approved by the FDA for treating female sexual disorders, further demonstrating its safety and effectiveness. In summary, an array of human studies and clinical trials have shown that PT-141 is an effective peptide for stimulating sexual desire, treating female sexual disorders and treating erectile dysfunction in men.

The elimination half-life of PT-141 has been determined to be 120 minutes, indicating that the peptide can be administered once daily, typically over a 12 week period [8]. A large number of human clinical trials have determined that the effective dose for PT-141 is either 1.25 mg or 1.75 mg administered via subcutaneous injection. At this dose, significant increases in sexual desire, arousal and orgasm were achieved.

Large clinical trials including hundreds of participants have shown no serious adverse effects and concluded that self-administered, subcutaneous PT-141 was safe, effective and well tolerated. Minor side effects reported include, nausea, flushing and headache.